Last week, Huffington Post printed a story detailing how a member of the far-right group the Proud Boys showed up to videographer Vic Berger’s home. The Proud Boy, Kenneth Lizardo, had seen some of Berger’s videos on Twitter about his group and was not happy. “Are you Vic? Your videos are hurting a lot of people. You’re really hurting the Proud Boys. You need to stop making these videos,” Lizardo said to Berger in an effort to intimidate him.

A trustworthy source that talked to Proud Boys close to Gavin told Bernard Media that McInnes knew exactly what Lizardo had done and went as far as to say, “It’s not a big deal. Vic didn’t even get hurt.” It is believed that McInnes viewed the cell phone footage that Lizardo shot while threatening Berger at his home.

This house call was sparked by a post in a Proud Boys private group calling on members to gather, “phone numbers, addresses, social media profiles and personal information” and more on these “videographer stalkers.” They were clearly successful and unfortunately this is not an isolated incident. Nathan Bernard of Bernard Media, was also doxed. And his personal information remains posted on Twitter by a member of the Proud Boys.

“Because of Gavin and his Proud Boys calling for the doxxing and harassment of me and my family, the Proud Boys decided to go find my address and post it on Twitter. It was posted by a Proud Boy, Vincenzo Molino, a friend of Kenneth Lizardo, on the same day Vic received the leaked email from the Proud Boys. Molino has now pinned the tweet with my address to his Twitter profile after the Huffington Post article came out. He also has a picture of Gavin as his Twitter profile photo. I’m not sure how this isn’t in direct violation of Twitter’s policy of sharing personal information of other users. This kind of doxing is really dangerous, especially after Vinny’s friend Kenneth Lizardo showed up at Vic’s house to threaten him. It’s now left the internet and entered the real world.”

Despite the violation of Twitter’s terms of service, the company has taken no action. “I reported the tweet right when I saw it,” Bernard said. “Also sent Jack a DM with the Huffington Post piece and the tweet in question. No action has been taken. All I got was a message that they received my report. By the look of Jack’s feed he’s vacationing in Australia right now. Must be nice!” Vic Berger was perplexed, but not surprised, by Twitter’s non-action on this issue, “It’s well known that Gavin McInnes has created a gang that is set out to be violent. I mean, their actual motto is ‘fighting solves everything.’ Gavin has called for violence countless times and Twitter has a record of looking the other way when its platform is used in this way. Why hasn’t Twitter taken action on Gavin, The Proud Boys or, at the very least, ‘Vinny?’ This is a form of terrorism.”

There is also the fact that Jason Kessler, who organized the Neo-Nazi Unite The Right rally in Charlottesville is, affiliated with the Proud Boys. Berger noted, “If anyone is in denial that Gavin is running a hateful, thuggish gang of violent animals, how do you explain Jason Kessler being a full-fledged Proud Boy Gavin regularly had on his show?”

McInnes has already run into trouble because of his deep ties and promotion of Kessler and other Neo-Nazis. In November, the Proud Boys Norwegian cruise vacation was terminated by the cruise line because of the connection. 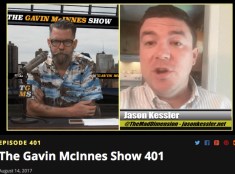 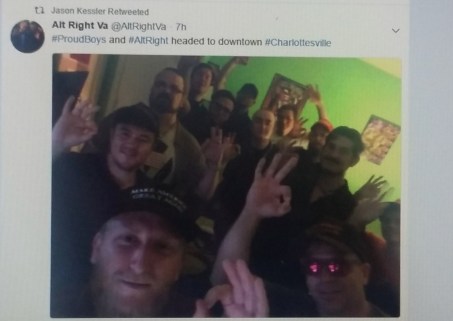 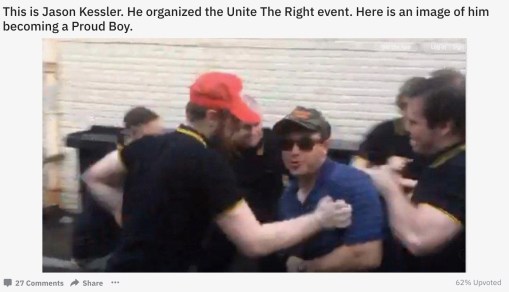 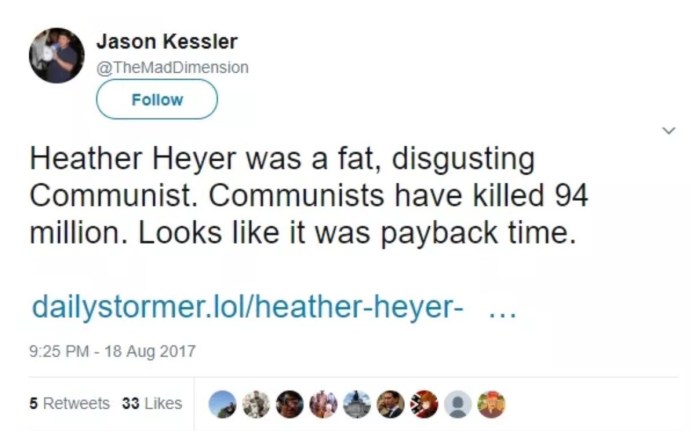 A Twitter user who wished to remain anonymous out of fear of retribution from the Proud Boys said, “What are Jack Dorsey and Biz Stone waiting for? Does there need to be more bloodshed? If you catch these cases early you literally save lives. Let’s not have more people end up in body bags. We don’t need anymore of that.”

Gavin McInnes calls on the Proud Boys to commit violence. To get to a "4th degree Proud Boy," one must fight for, or be arrested "for the Proud Boy cause." pic.twitter.com/EwOHfd0BsG

Twitter’s action on this issue is an open, on-going Bernard Media investigation. More information will be provided on Gavin McInnes and his Proud Boys as it is made available by local police and the Federal Bureau of Investigation.

darbymaxwell - May 30, 2018
0
Last week, Huffington Post printed a story detailing how a member of the far-right group the Proud Boys showed up to videographer Vic Berger's...

Nathan Bernard - May 29, 2018
0
Ben Shapiro met with Nikki Haley and her son, an alleged Shapiro superfan, yesterday. Shapiro has been extremely pro-Haley as she pushes the narrative...

Nathan Bernard - May 29, 2018
0
Tommy Robinson is the founder of the English Defence League, a far-right group that opposes the spread of Islam into the United Kingdom. On...

Baked Alaska Maces Himself at a Neo-Nazi Rally