Ben Shapiro will be the first to claim that the alt-right hates him. “I’ve been very, very outspoken against the alt-right,” Shapiro told ABC News. “I’ve said alt-right is a garbage movement composed of garbage ideas that it has nothing to do with constitutional conservatism.”

Shapiro’s views are not too different from the alt-right though. The vast majority of Shapiro’s content is bashing immigrants, explaining that there are “680 million radical muslims” and demeaning black people as “lazy, flat-brim hat wearing losers.” Past his ideology, Shapiro also monetizes his content in a similar fashion to the alt-right. Recently, Shapiro pushed survival food kits to his followers in preparation for impending armageddon. This is a tactic used frequently by Alex Jones and Infowars.

Shapiro’s borderline alt-right content has also inspired real world violence. Last year, there was a mass shooting in a Quebec City Mosque that killed six people. After the tragedy, prosecutors found that the killer was obsessed with Shapiro’s content, researching his videos and articles intensively prior to the massacre.

Now, evidence has been brought to light exposing that Shapiro’s Youtube fanbase overlaps heavily with the likes of Richard Spencer, Tommy Robinson, Stefan Molyneux and other alt-right personalities. The study providing this evidence was compiled by Data & Society, a non-profit in New York City. Ultimately the study explains how these channels help each other grow, monetize and “sell a political ideology” to their millions of subscribers. It is clear from the study that this Youtube network of influencers is a hot bed for far-right wing radicalization, promoting white nationalism and race baiting. The study was widely accepted and disseminated across social media. Shapiro however, did not take kindly to his ties to the alt-right being exposed and shared widely.

So now we've got Vox Voxxing the "six degrees of Kevin Bacon" study that connects me with Richard Spencer. Well done, as always, guys. pic.twitter.com/0syyatqsUC

Fans of Shapiro speaking with Bernard Media were not surprised by the findings. “Yeah, it’s not a shocker. Usually Ben’s connections to far right, alt-right figures goes under the radar, but he used to be at Breitbart. The goal of Ben’s operation is to grow and monetize for his investors by any means necessary.”

Bernard Media will continue to monitor and provide updates on Shapiro’s ties to the alt-right. More information will be made available as necessary. 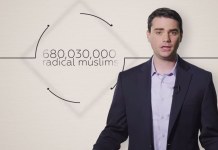