Jason Van Dyke serves as legal counsel for the Proud Boys, a white nationalist group that helps young males advance themselves in the neo-nazi movement. Before his employ with the Proud Boys, Van Dyke was an avid Twitter user, frequently espousing racist and anti-semitic views. Once, Van Dyke tweeted a picture of a noose to a black Twitter user with a caption saying, “look good and hard at this picture you fucking nigger. It’s where I’m going to put your neck.” In another unhinged tweetstorm, Van Dyke let a user know, “your kiddies are quite a nuisance. My advice: run and hide. If I find you, I WILL kill both you and your family.”

In July 2018, Van Dyke also got into an aggressive online feud with video editor, Vic Berger. Mr. Berger had compiled several comedic video edits that showcased Proud Boys founder Gavin McInnes ramming a buttplug up his anal canal and pulling out his penis live on air. Berger had kindly explained to Van Dyke on Facbeook that Van Dyke was working for a white supremacist organization. Instead of reflecting on his life choices, Van Dyke refused to believe that the Proud Boys were in fact a white supremacist group. “You’re obviously not very good at identifying white supremacists. Perhaps you should consider doing something more productive with your time or, at the very least, do something that you’re good at and which won’t land you in legal trouble before long.”

Users following the feud then urged Berger to a review post on Van Dyke’s Facebook, where Van Dyke is fully outfitted in camo body armor and holding what seems to be an M4 army rifle. The caption of the post let’s his dissenters know, “if you mess with my career (the one that requires me to wear a suit), I might be dressed like this the next time you see me!”

None of this is a surprise though. The Proud Boys have been at neo-nazi rallies all over the country, including the Charlottesville Unite The Right Rally last year where protestor Heather Heyer was murdered. Gavin McInnes has also let followers know that he is, “right there” in terms of hating jews because they, “keep pissing everyone off.” Additionally, Jason Kessler, Richard Spencer, Baked Alaska and other white nationalist personas were regular guests on McInnes talk show before it was cancelled.

Bernard Media will continue monitoring other Proud Boys that come out as full blown fascists and will provide updates as necessary. 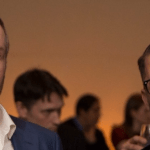